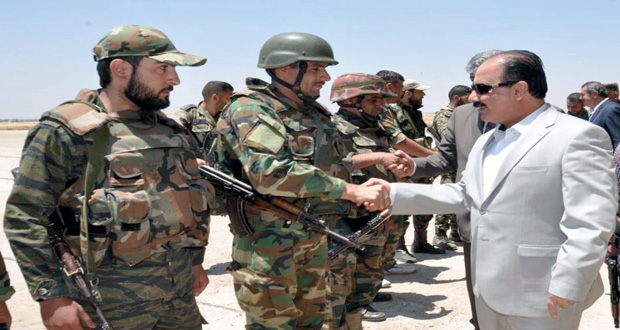 Al-Hilal conveyed to the garrison members President Bashar al-Assad’s greetings and feeling of pride of their heroism in repelling terrorists who have been attacking the airport for days.

Al-Hilal also met with popular and party figures from Sweida province, hailing the Sweida locals’ patriotic stance and resistance to the terrorists.

“There is no fear for Sweida, whose people, throughout their history of struggle and fighting for freedom, have known no defeat,” said al-Hilal, adding that it was from Sweida the Great Syrian Revolt led by Sultan Pasha al-Atrash started against the French colonialists.

The participants affirmed that they stand side by side with the Syrian Arab Army in defending their homeland, stressing that none of the tendentious attempts of disinformation will affect Sweida locals’ will to resist.