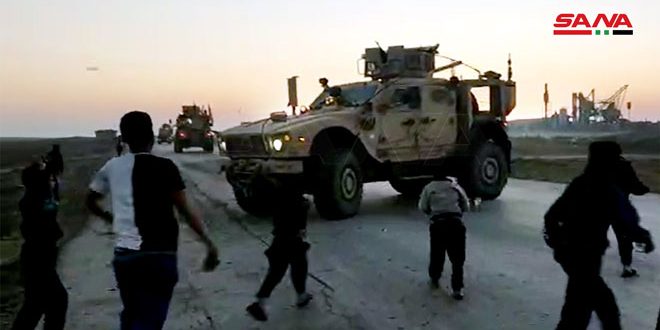 Hasaka, SANA- The locals in Hamou village, Qamishli southern countryside have intercepted a convoy of vehicles belonging to the US occupation forces and prevented it from passing on the outskirts of their village and expelled it from the area.

At 06:00 a.m. on Monday, a convoy of three armored vehicles affiliated with the US occupation troops, accompanied by a vehicle belonging to the QSD militia tried to cross the highway and pass near the village, but the locals intercepted the convoy, threw stones at it, and expelled it from the area, local sources told SANA.

On November 17th, the locals of Tal Dahab village in Qamishli southern countryside intercepted a convoy of vehicles for the US occupation forces and prevented it from passing through the village towards Qamishli city.