Deir Ezzor, SANA – Popular defense groups in the eastern region on Saturday killed three members of the terrorist organization of the Islamic State in Iraq and Syria (ISIS) and destroyed their car in al-Boulail village in Mouhassan area in Deir Ezzor province.

Local sources told SANA that the groups also arrested all members of a terrorist group affiliated to the ISIS near a center for rural welfare services on the outskirts of al-Mayadeen city. 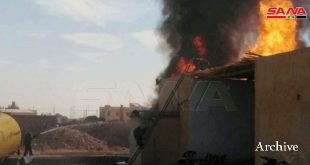 Hasaka, SANA- A number of US occupation forces – backed QSD militia were injured in …