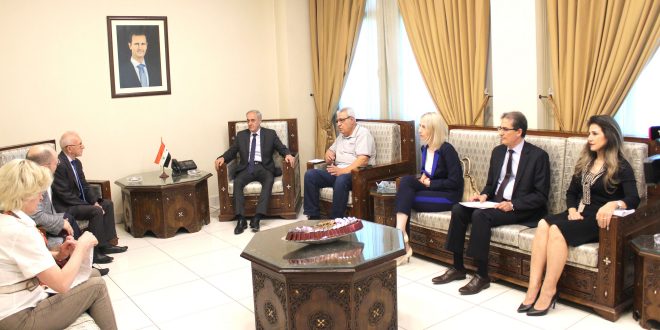 Damascus, SANA- Assistant Foreign and Expatriates Minister, Dr. Ayman Sousan stressed that the Syrians wide participation in the presidential election is an evidence on adherence to sovereignty and independent national decision and rejection of any form of dependency, guardianship and interference in their country’s affairs.

During a meeting on Thursday, Sousan briefed a Russian mass media delegation that is visiting Damascus to cover the presidential election, on the duties of the presidential entitlement due to the constitution and the meanings of the Syrians participation in the election process, on top of which adherence to sovereignty and independent national decision and rejection of any form of dependency, guardianship and interference in their country’s affairs.

He indicated that the completion of the presidential entitlement constitutes a starting point to enhance field achievements that have been achieved, on top of which the continuing battle against terrorism, ending the two US and Turkish occupations to the Syrian territories, strengthening the production process and improving the economic condition to alleviate suffering of the Syrian people.

In response to Russia journalists, Sousan asserted positive dealing with the work of the Committee of Discussing the Constitution as it is considered as a Syrian- Syrian dialogue led and owned by the Syria without any foreign interference and that the Constitution is a sovereign affair.

On the Syrian-Arab relations, he stressed that Syria is opened to any positive and serious initiative, noting that the Arab League should express the aspirations of the Arab peoples and defend the interests of the Arab Nation.