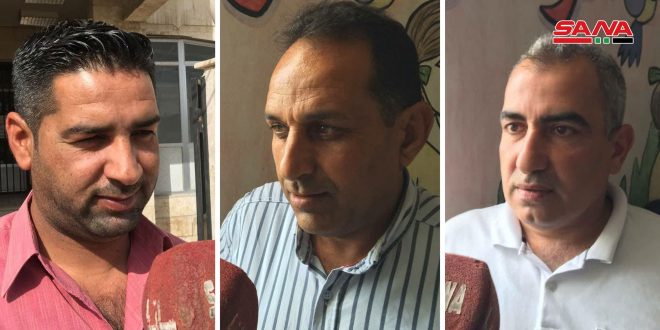 Hasaka, SANA- Citizens of Qamishli and its countryside affirmed their determination to participate in the presidential elections scheduled on May 26th , saying the process reflects the ability of the Syrian people, who have been exposed to all forms of terrorism, to practice their democratic and constitutional life.

Qamishli citizens said that the election entitlement will be a legislative victory to add to the victories of the Syrian Arab Army.

“I will participate in the elections to choose the most suitable candidate who would complete the process of steadfastness, confront terrorism, and contribute, along with all Syrian people, to rebuilding and the country ,” Hassan Ka’aed, from al-Yarubiyah, said.

Halibi Mohamad al-Mohamad, a citizen from Tal Hamis, indicated that electing the appropriate person to lead Syria is the choice of Syrian people alone and every one must play an active role for the success of this entitlement.

For his part, Lawyer Ahmed Al-Bahri, from the city of Qamishli, said that his participation “comes as crowning of the victories of the Syrian Arab Army and in appreciation of their sacrifices,” calling on all the citizens of the homeland to actively participate in that entitlement.

2021-05-10
nisreen
Share
Previous Shaaban: Syria has given an example to the world that people’s Will can’t be defeated
Next Nine Palestinians martyred, tens wounded in Israeli bombing of Beit Hanoun, North of Gaza