Shaaban: Syria has given an example to the world that people’s Will can’t be defeated 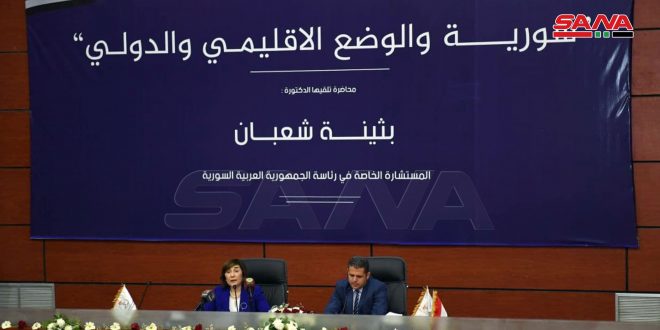 Aleppo, SANA- Special Advisor at the presidency of the Republic, Bouthaina Shaaban, affirmed that Syria, with its resilience and victory, has given a model to the world that the will of people can’t be defeated. “Syria, in light of its strategic geographic position which has been an important destination for the Silk Road between the East and West, is an influential country,” shaaban said at a lecture entitled “Syria and regional and international situation,” at the National Union for the Syrian Students, Aleppo branch.

Shaaban added that Syria has been and still is a unique example for coexistence and it stands against terrorism, occupation and hegemony and call for equity regardless of religion.

She affirmed that the popular participation in the upcoming presidential elections will be an honorable model for what has been offered by the Syrians in their defense of land and sovereignty.