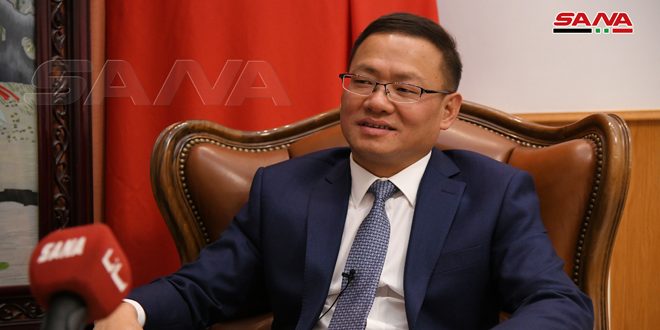 Damascus, SANA- The Ambassador of the People’s Republic of China in Damascus Feng Biao affirmed his country’s keenness to strengthen friendly and cooperation relations with Syria in various political, economic and commercial fields.

In an interview with SANA on the occasion of the 71st anniversary of the founding of the People’s Republic of China, the ambassador confirmed that Beijing will continue to offer aid to Syria and is committed to achieving more practical cooperation within the framework of the “Belt and Road” initiative in addition to playing a constructive and positive role in finding a solution to the crisis in Syria.

Ambassador Feng Biao referred to the mutual support in the issues of concern to the two countries and the strength of bilateral relations in the face of international changes.

The diplomat explained that China has adhered to a just stance towards the crisis in Syria, through which it affirmed the need to respect the sovereignty, independence and territorial integrity of Syria.

He said that China categorically rejected foreign interference in Syria’s internal affairs, and considered that the solution would be through a comprehensive political process led by the Syrians themselves.

The Chinse ambassador also highlighted Syria’s support for his country in confronting the novel Coronavirus epidemic, and other files related to Hong Kong, Xinjiang and Taiwan, and the reform of the UN Security Council, among other issues of interest to China and its people.

Biao pointed out that China has provided Damascus with materials and treatment programs to confront the epidemic and arranged virtual meetings between the medical experts of the two countries.

He said that Syria is considered an important partner to his country in establishing international relations of a new kind towards building a community of a joint future for humanity.

Biao referred to the two countries’ work to strengthen and develop their economic and commercial relations, indicating that the volume of commercial exchange in 2019 reached $1.31 billion, registering an increase of 3%.

The ambassador reviewed his country’s experience in confronting Corona pandemic, emphasizing that his country has put people’s safety and health at the top of its priorities.

And about the situation of the Chinese economy after Corona pandemic, ambassador Biao stated that his country has taken a series of policies and measures that have contributed in controlling the pandemic and accelerated the resumption of work and production, which made China the first major economy to return the development path following the pandemic so that the economy has witnessed growth in the second quarter of the year by 3.2%.

Regarding the situation in Xinjiang region, the diplomat clarified that for 65 years that region has lived in stability and has enjoyed economic development, prosperity, self-government and religious harmony, as the poverty rate in it decreased from 22.84 percent in early 2014 to 6.51 percent.

He concluded that his country guarantees freedom of religious belief for citizens of all nationalities.

China 2020-10-01
nisreen
Share
Previous Nine students injured in a blast of bomb left behind by terrorists in Bait Jin, Damascus Countryside
Next Peskov… Transporting militants from Syria and Libya to Karabakh poses threat to the region