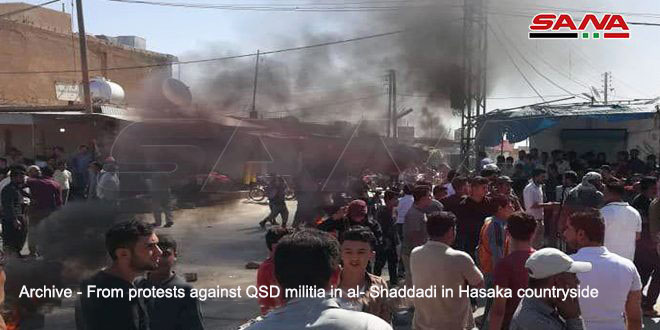 Raqqa, Deir Ezzor, SANA- A number of QASD militia and the Turkish occupation-backed mercenaries were killed and injured in attacks launched by unknown persons on their dens and checkpoints in Raqqa and the eastern countryside of Deir Ezzor.

Civil sources told SANA that unknown persons who were riding a motorcycle, launched an attack with weapons and machine guns on the dens of the Turkish occupation- backed mercenaries in the vicinity of al-Zibakiya village in the northern side of Raqqa countryside, killing one of the terrorists.

In the context, the sources pointed out to the killing of one of the militants of QASD militia, supported by the US occupation forces, by unknown persons near the farms’ roundabout in Raqqa city.

In the eastern countryside of Deir Ezzor, local sources indicated that unknown persons attacked a barrier for of QSD militia on the road between Darnaj and al-Tayyana towns, injuring one militant.

QSD kidnaps a number of young men in al-Kasrah, west of Deir Ezzor

Meanwhile, QSD militia carried out an incursion campaign and kidnapped a number of civilians in al-Kasrah town in the western of Deir Ezzor countryside and took them to unknown destinations.