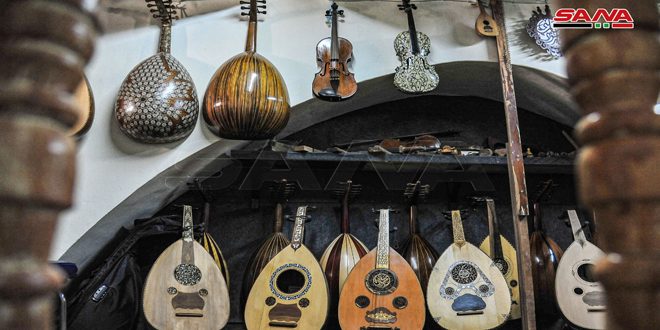 Damascus, SANA- Sarouja neighborhood has been associated with people who love Damascus for its beauty and originality. It is a small neighborhood known as the Alley of Roses which embraces a workshop for the manufacture of oud that makes passers-by stop at the tunes emerge from it and are motivated by curiosity to enter it.

The workshop was launched into existence as a humanitarian development project for al-Wafa Development Association in the form of an incubator for craftsman Bashar Jawdat al-Halabi, whose workshop was destroyed during the years of the terrorist war on Syria.

Bashar’s learning of the profession began with his father, the late Damascene oud maker, Jawdat al-Halabi, until he established his won first workshop in Lebanon in 1990, then he went to Darayya region. But after it was destroyed during the war, he moved his work to his home to obtain the support of al-Wafa association , which is interested in reviving the heritage professions and helping craftsmen whose workshops have been damaged by terrorism.

Regarding his choice to move to the Rose Alley in old Damascus as a place for his workshop, he said that this place embraced the Damascene oud industry since 1920, when it appeared as an extension to Al-Qaymariyya neighborhood from which most of the Damascene oud makers started.

Bashar combines in his workshop between the restoration of old sticks and the manufacture of modern ones. He also keeps a large group of oud makers and the Grand Master Sheikh Abdo Nahat dating back to the years of 1900 and 1913.

Bashar affirms that he is fond of that industry to which he is trying to revive again, preserving its basic character and form, taking into account his choice of the oldest types of wood while imitating the old shape with its decorations and models, and most importantly with the oud mold and its own voice.

Despite the fact that Bashar’s workshop is small in area , it has become fully equipped and includes all stages of the oud industry.