Homs, SANA- Homs fire brigades extinguished on Wednesday a large fire that broke out among the villages of Ghazaleh, Ram al-Anz and Balqsa in Homs countryside. 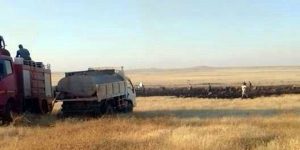 Colonel Othman Jouda, commander of Homs Fire Brigades, told SANA reporter, that the firefighting cadres of Homs put out several fires on Wednesday including a tree fire near the villages of al-Hasawiya and al-Khansa, and herb fires in Tal kalakh and Kafrayaa. In addition, the Civil Defense and the Homs Fire Brigades extinguished several fires on Tuesday that broke out in different areas in Homs and its countryside.

Putting out a fire that affected about 1,000 dunums of lands containing herbs in the countryside of Sweida.

Meanwhile, Shahba Fire Unit in Sweida province , in cooperation with the citizens, extinguished a large fire that affected about 1,000 dunums in the lands of Radhima, Alwa, Lahetha and al-Khalidiya villages, containing dray herbs in the northern countryside of Sweida.