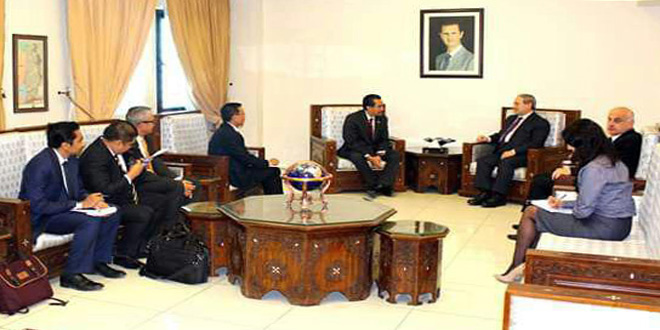 The two sides discussed the relations between the two countries and means to bolster them in all fields, as well as the situation in Syria.

Mikdad briefed the delegation on the developments in politics and on the ground in Syria, asserting that Syria will continue fighting terrorism in all its forms until it is completely defeated, the state establishes control over the entirety of Syrian territory, and all illegitimate foreign forces leave.

He also stressed that economic sanctions affect Syrians in all fields, and that they must be ended, lauding Indonesia’s positions in support of Syria.

For his part, Rauf noted that his country has maintained its presence in Syria and worked to improve relations in all fields, congratulating Syria on the victories achieved against terrorism.

He also expressed Indonesia’s desire for further cooperation with Syria in counter-terrorism, asserting that his country respects Syria’s sovereignty.