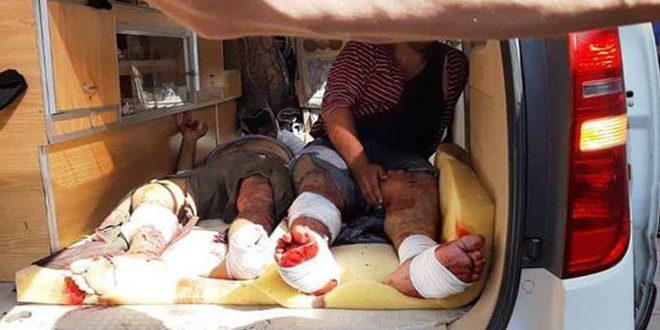 Hasaka, SANA_ The Turkish regime’s aircraft and artillery continued shelling the residential neighborhoods in Ras al-Ayn and targeted places of worship from mosques, churches and monasteries, which caused the people fleeing the targeted areas.

SANA reporter said that eight civilians were martyred and about 25 others were injured in the ongoing Turkish aggression on Syrian territory in and around Ras al-Ayn city despite the announcement of the Turkish regime reaching an agreement with Washington to suspend the aggression for 120 hours.

SANA reporter quoted local sources in Ras Al-Ayn as saying that eight civilians were martyred and 25 others were injured due to the intense and brutal shelling by Turkish regime’s aircraft and artillery on Umm al-Khair village and Zarkan area in the vicinity of Ras al-Ayn .

On Thursday, US vice-President Mike Pence announced an agreement with the Turkish regime to suspend aggression on Syrian territories for 120 hours to allow QSD withdraw from so-called “safe zone.”

According to the sources, groups of the Turkish occupation forces and their mercenaries infiltrated into Ras al-Ayn city and the surrounding villages and attacked with medium and light weapons the people in the villages of Lazka, Abah, Mraikiz, Bab al-Khair and Sheikh Hussein Tomb in Ras al-Ayn countryside.

The Turkish regime is launching offensive on  a number of villages and towns in the countryside of Hasaka and Raqqa, which resulted in the martyrdom and injury of hundreds of civilians, including children, women and workers in the service sectors, and considerable material damage to service facilities, vital infrastructure such as dams, power and water plants.

continues offensive regime Turkish 2019-10-18
ghossoun
Share
Previous Demonstrations in Lebanon continue
Next President al-Assad to Lavrentiev: Work should focus on stopping offensive, withdrawal of all Turkish, US and other illegal forces from Syrian territory