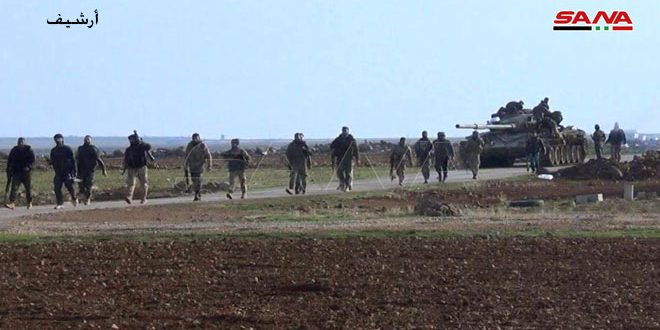 Idleb/Hama, SANA – A Syrian Arab Army unit on Sunday destroyed a vehicle used by terrorists and eliminated a number of them with rocket strikes targeting their positions and movements in Idleb’s southeastern countryside and Hama’s northwestern countryside.

SANA’s reported said an army unit detected a 4WD vehicle equipped with a machinegun with a number of terrorists on board that had been moving on a side road in Rajm al-Qett village in Idleb’s southeastern countryside and heading in the direction of a military position, and the army targeted the vehicle with a rocket strike, destroying it and eliminating the terrorists on board.

In Hama’s northwestern countryside, an army unit targeted with artillery and rocket fire the positions and hideouts of terrorists in Kafr Zeta, destroying their fortified positions and equipment and eliminating a number of them.