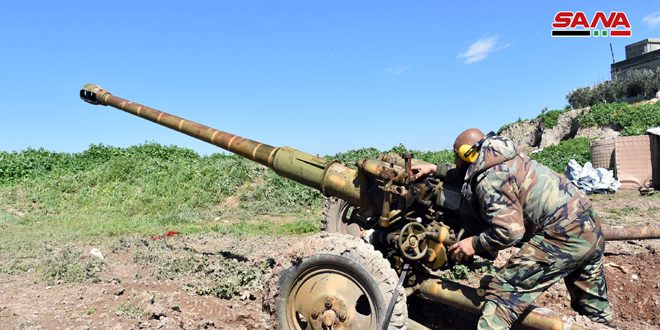 Provinces, SANA – Syrian Arab Army responded to terrorists’ breaches of the de-escalation zone agreement by targeting their hideouts in al-Ghab plain and the northern countryside of Hama province.

SANA’s reporter in Hama said army units targeted terrorists’ hideouts and gatherings at the outskirts of al-Sharia village in al-Ghab plain area, killing a number of terrorists, injuring others, and destroying their hideouts and fortified positions.

Other units targeted with concentrated terrorist groups that were moving towards safe areas and military positions in the surrounds of al-Madiq castle and the outskirts of al-Huwaiz town north of al-Ghab plain, eliminating the terrorists.

In the province’s northern countryside, army units positioned in al-Qabariya village targeted Jabhat al-Nusra terrorists in the farmlands in the direction of Kafr Zita and Morek, destroying their hideouts and cutting off their supply and infiltration routes.

Meanwhile, units of army in the Badyah of sweida carried out a swift military operation against armed terrorists in the rocky cliffs of al-Kara’a region, killng five of the terrorists.