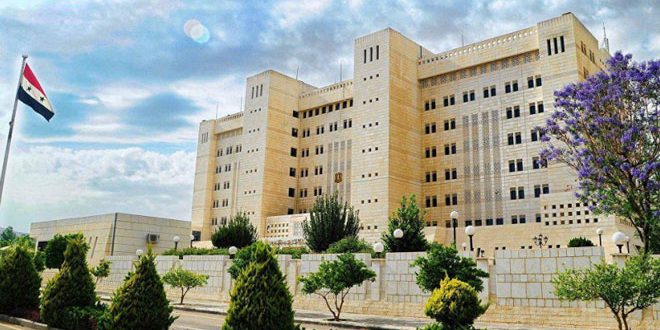 Damascus, SANA-Syria has stressed its categorical rejection of US president Donald Trump’s resolution which recognizes the annexation of the occupied Syrian Golan to the Zionist entity, saying that the step represents the highest degrees of contempt for the international legitimacy and a blow to the international community.

“The US president has recognized the annexation of the occupied Syrian Golan to the Zionist occupation entity in a flagrant aggression of the sovereignty and territorial integrity of the Syrian Arab Republic, turning a blind eye to all international reactions that condemned such resolution,” an official source at the Foreign and Expatriates Ministry said on Monday.

It added that the move  comes as an embodiment of the organic coalition between the US and Israel in the severe hostility to the Arab nation which makes the US as the main enemy of the Arabs through the unlimited support and protection offered by the US successive administrations to the Israeli usurper entity.

The source affirmed that the US act deprives the UN its status and credibility through the US flagrant violation of the UN resolutions relevant to Golan, particularly resolution No.497 for 1981 which stresses the legal situation of the Syrian Golan as an occupied territory and rejects the annexation decision to the Israeli entity and considers it as null, void and has no legal impact.

“The US president has no right or legal capacity to legalize the occupation or usurp the others’ land by force… and this US hostile policy makes the region and the world subject to all dangers, ” the source said.

It added that the US resolution regarding the occupied Syrian Golan, and before it was the recognition of occupied Jerusalem as a capital of the occupation entity, and moving the US Embassy to it, all affirms that no one in the Arab nation is in a safe place of the US evils, a thing which requires the Arabs to take a serious and historic stance to pass the Arab bad situation and defend the Arab nation’s dignity, existence and rights.

The source went on to say that Syria, while announces its categorical rejection of the US resolution, affirms that the whole universe can’t change the historic reality that Golan was and still is an Arab Syrian territory, and its liberation, with all available means, and its restoration to the Homeland, Syria, is a firm right.

It added that the Syrians’ determination to achieve the liberation of Golan is more concrete today, more than any time before, having the same will that defeated the terrorist aggression.

The source concluded by saying that the Syrians, all over the homeland, as they always were, stress today, in the face of the black decision of the US president, their unity and cohesion with our resistant families in the occupied Syrian Golan, sharing with them the bitterness of the occupation and aggression as well as the determination to defeat the aggression and liberate the Golan.