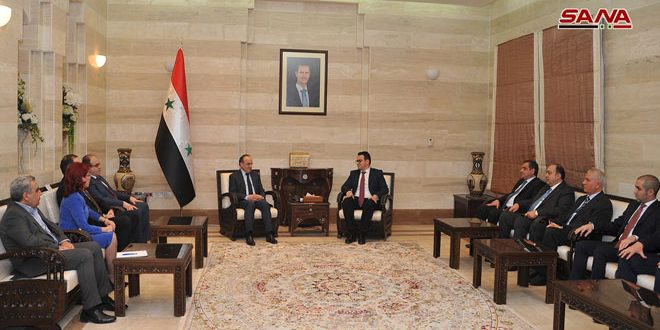 Damascus, SANA – Prime Minister Imad Khamis said that Syria continues to work towards preparing a suitable atmosphere for attracting local and foreign investments by preparing a modern investment law and a comprehensive investment map, as well as facilitating administrative procedures and providing necessary services to investors.

Meeting an Armenian economic delegation on Saturday, Khamis stressed the need for bolstering Syrian-Armenian investments to match the level of the relations between the two countries.

He also underlined the importance of Armenian companies participating in reconstruction in the fields of infrastructure, constructing builds, and producing building materials.

Khamis called on businessmen from friendly countries that supported the Syrian people in fighting terrorism to look into the incentives provided by Syria in all investments fields and seize available opportunities.

For his part, head of the delegation Narek Karapetyan said that Armenian businessmen are interested in making use of investment opportunities in Syria and of the facilitations provided for facilitating relations between the two countries’ private sectors.

He stressed the need for developing partnerships between establishments and businessmen from both sides in all economic fields to expand cooperation in investments.