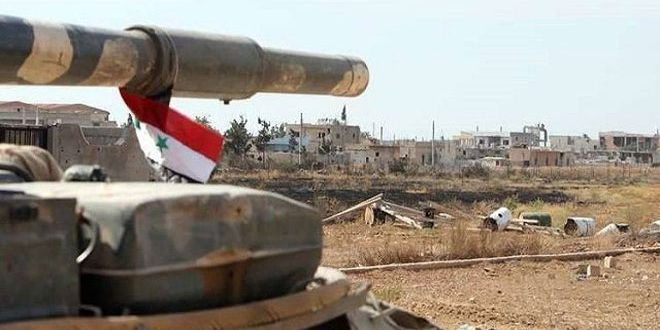 SANA reporter said that an army unit centered in the vicinity of Taybat al-Imam town on Thursday conducted precise bombardments on positions of Jabahat al-Nusra terrorist organization in the vicinity of al-Bweida village in the northern countryside after the terrorists’ attempt to attack the military points in the area .

The reporter added that a number of terrorists were killed or injured and their arms and equipment were destroyed.

The reporter mentioned that an army unit responded to the violation of the demilitarized zone agreement in Idleb by terrorists of the so-called “al-Ezza battalions” and wiped out many of them and destroyed their fortified sites, weapons and equipment in the outskirts of Ma’rkebeh village in Hama northern countryside.

On Wednesday, army units confronted attempts of a terrorist group of the so-called “al-Ezza battalions” to infiltrate into military posts centered around Zlain , Shaliout and al-Zakat villages.