Syria, home to oldest archaeological village and human settlement in the world 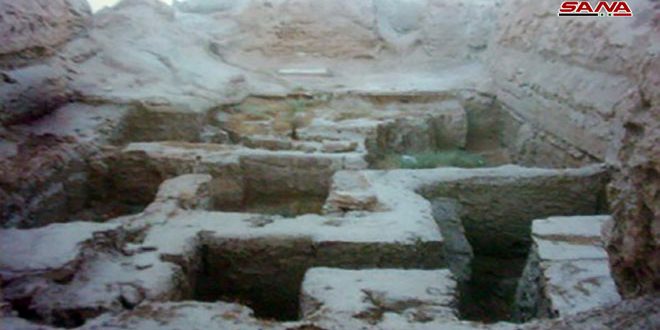 Damascus, SANA – Syria has always known as the cradle of ancient great civilizations and home to the oldest human settlements in the world, a fact that has been demonstrated by archaeological discoveries, researches and spatial analysis of excavation sites.

Speaking to SANA, Historian Mahmoud al-Sayyed of the General Directorate of Archaeology and Museums said that the Syrian archaeological ruins, dating back to the prehistoric era, set clear evidence on the Syrians’ dexterity in spatial organization of rural areas and provide a closer look at evolution of housing typologies from caves and huts into oval, circular and rectangular pit-houses. 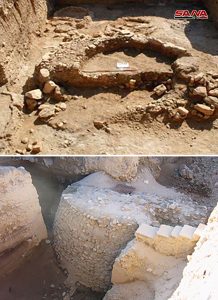 Al-Sayyed, who is a reader of ancient history and inscriptions, stressed that the most ancient archaeological village in the world was discovered in Tel al-Qaramel archaeological site on the right bank of Queiq River, north of Aleppo, adding that the village, dating back to 11,000 B.C., consisted of a cluster of dwellings built according to the same architectural style, providing significant information on the first human settlement and the transition from hunting and gathering society to the construction of large permanent villages. 14,000-year-old huts with fireplaces were also found at the site.

“Round pit-houses partly dug into the ground at a depth of 0.5 meters and covered with wooden or thatched-roof were unearthed. Their diameters range between 2 to 3 meters. They are built of stones that were bonded together with mud mortar and contained a fire hearth and a granary,” noted al-Sayyed, indicating that the Tel al-Qaramel archaeological site included fiver round towers that are considered to be the oldest of their kind in the world.

On the other hand, Abu Hurayra archaeological site which dates back to the Mesolithic Period (Middle Stone Age) documented the origins and development of Natufian villages in the surrounding area of the Euphrates River, the transition to permanent agricultural communities, animal domestication and building houses and villages. Human settlement in the northern area dated as far back as 11,500 B.C and it was a small village covering an area of one hectare which consisted of several simple round houses built in deep holes dug into the ground whose roofs were covered with twigs and reeds, the walls were made of wooden logs and the floors built of stones with a fireplace in the center of the house and a grain storage near to it. 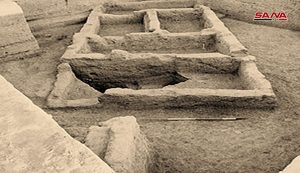 Al-sayyed pointed out that underground round houses whose walls were made of longitudinal carved limestones were first discovered in Tel al-‘Abar archaeological site, adding that they dated back to 10,000 B.C. and contained small grain storage rooms and limestone circular bench.

Moreover, a 10,000-year-old ancient typical village of an advanced architectural style in which longitudinal carved stones were used for the first time in the world was uncovered in Tel al-Jarf al-Ahmar archaeological site, not to mention the round, oval, rectangular and multi-function houses which trace the development of early villages and the unique architectural design.

According to the historian al-Sayyed, Ja’adet al-Maghara archaeological site, northwest of Aleppo, sets an important evidence on the population stability and urban growth in Syria during the Neolithic Era (the New Stone Age). The C14 (radiocarbon dating) analysis results showed that the remaining isolated rectangular houses date back to the second half of the ninth millennium or the Pre-Pottery Neolithic Age and the pierced columns reveal that they were built of removable materials.

A round building of 7,5 diameter with a central pillar, wooden beams to support the roof, weaved of twigs and thatches, was discovered at the site, added al-Sayyed, indicating that it was called the “House of Drawings” and it included geometric decorations on 3 walls which have been regarded to be among the oldest human-made drawings in the world. 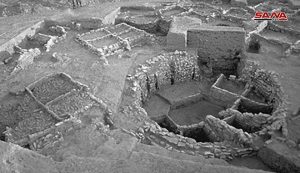 In Tel al-Muribat, the oldest houses with colored stone flooring tiles in the world which date back to 8500 B.C. were found. They were round-shaped, built of dried clay slabs and Euphrates poplar logs, covered with clay layer and surrounded with 70-cm high fence. And for the first time in the world, two different architectural concepts were discovered and this was aimed at providing living spaces suitable for winter and summer times respectively.

Syria is also considered home to the ancient civilizations and people which used gravel and mortar for walls and floors, built fire hearths and tandoor ovens and provided houses with drainage channels. The oldest organized village was unearthed in Tel Buqrus, on the right bank of the Euphrates River, and it was inhibited in the period between 6400 to 5900 B.C.

Located on the left bank of the Euphrates River which swept away all archaeological sites alongside, Tel al-‘Abar which dates back to the Neolithic Era is considered the first archaeological site in Syria and contain the only remaining structure in the region, a huge round building that is 2 meters deep and 2 meters in diameters with fingerprint drawings engraved on its walls. A lime floor is built over a clay layer and river stones and decorated with deep engraving.