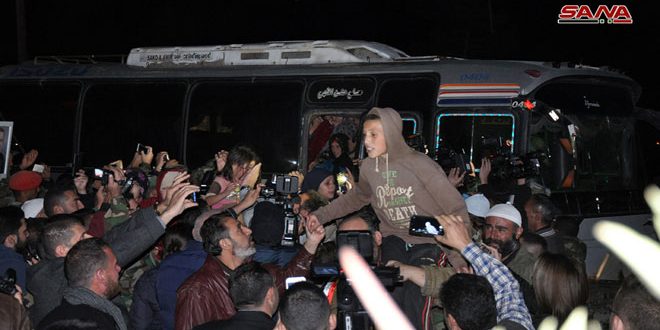 Sweida, SANA –Overwhelming happiness prevailed the scene when the freed abductees were received by their families, who expressed pride and appreciation over heroic bravery of the Syrian Arab Army.

On Thursday, the Syrian Arab army managed, in a valiant and accurate operation, to liberate the civilians abducted by ISIS terrorist organization from Sweida province weeks ago, following a fierce battle with an ISIS group in Humeima area northeast of Tadmur (Palmyra).

the freed abductees expressed their confidence  that the Syrian Arab Army’s determination to liberate them has not budged, and they  have always been certain that the army was coming to rid them of terrorists’ clutches.

“I cannot express my joy being saved from the terrorists by our brave army… I couldn’t wait until the soldiers reached the car we were inside after they had engaged in fierce clashes with the terrorists.” Mrs. Suad Abu Ammar, who was freed besides her children said. She also expressed deep thanks to the leadership.

Mrs. Firyal Abu Ammar, who was and her four daughters and son freed, said that they have finally become safe after all the tough conditions they had gone though. “ we had spent hard times of hunger, thirst, panic and fear before the army set us free…words cannot express my gratitude to our heroes.”

With eyes filled with tears, the boy Rajwan Abu Ammar talked about his harsh experience of torture and horror. “But our brave soldiers managed to save us ,” he commented.

“I’m so happy that I’m with my family again… I miss ordinary life where no fear and harsh treatment is there… the feeling of security is indescribable,” the freed girl Manya Abu Ammar said.

“The terrorists used to constantly move us from a place to another and put us in underground hollows… I’m blessed to see my family and friends again,” Aksam Abu Ammar, a boy from the released abductees said.

Carrying the national flags, families of the freed abductees expressed feelings of deep gratitude and high appreciation to each and single member of the Syrian Arab Army, having added a new chapter of heroism to its battle against barbarism.
Mother of abductee Fadia Abu Ammar couldn’t hide her trembling voice having met her daughter after weeks of worry and waiting. She expressed conviction that a country guarded by such an army cannot know the taste of defeat.

On October 20, a batch of women and children who had been abducted from al-Shabki village in Sweida eastern countryside were liberated from ISIS.