Al-Jaafari: The West plotted for the war on Syria in service of the Israeli interests 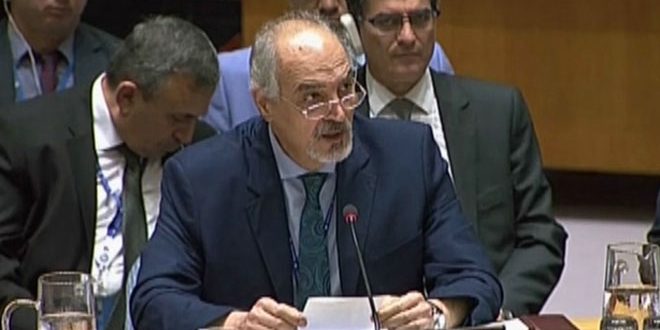 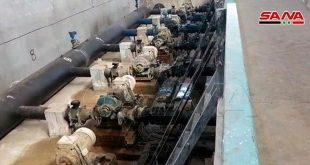 New York, SANA – Syria’s Permanent Representative to the United Nations, Dr.Bashar al-Jaafari stressed that the West has plotted against Syria with the aim of changing the country’s stances, policies and national identity to serve a “New Middle East” project that imitates the Judaism project of /Israel/ and cancel the Palestinian people’s right to establish their own independent state.

Al-Jaafari made his remarks during a UN Security Council meeting held Tuesday to discuss the situation in Syria.

Al-Jaafari pointed out to statements made by the Retired US Army Colonel Lawrence Wilkerson one week ago that those who call to launch an aggression on Syria have been looking for any pretext to justify a probable attack against it and that the US, Britain and France have no evidence that the Syrian state used chemical weapons earlier, but rather the US intelligence officials and their agents inside Syria failed to prove their allegations since the evidence indicates that the terrorist organizations are behind launching these attacks using chemical weapons.

The Syrian diplomat noted that the Israeli aggression on Syria comes as completion to its aggressive policies and desperate attempts to provide moral support to the terrorist groups which suffer successive defeats by the Syrian Arab army and its efforts to cleanse the Syrian territory, stressing that this act violates the “disengagement of forces” agreement signed in 1974 and relevant UN Security Council resolutions, particularly resolution No 350 (1974).

Al-Jaafari reiterated Syria’s call on the UN Security Council to assume its responsibilities in maintaining international peace and security and take firm and immediate measures to hold Israeli entity accountable for its terrorism and crimes which constitute a flagrant violation of the UN’s Charter and rules of the international law.

He added that preserving the lives of Syrians requires cooperation with the Syrian government and support for its efforts to eradicate terrorism instead of manipulating the minds of western intelligence officers through circulating misleading terms such as “moderate armed Syrian opposition” or “non-state armed groups” or “Islamic caliphate state” or “Jihadist groups”.

He wondered why does the French government continue to provide political cover to the terrorist groups in Syria despite the fact that these are the same groups which attacked the Bataclan theatre in Paris and the French authorities have admitted the risk of those terrorists in statements made by the French Foreign Minister who warned against consequences of the Syrian military operation in Idleb on security in Europe and fears of the flow of thousands of terrorists to Europe.

Al-Jaafari pointed out that Syria has provided the UNSC with serious information circulated by Dutch mass media about the involvement of Dutch government in funding and offering logistic support to terrorist groups in Syria, adding that “wouldn’t the Dutch government’s act be considered a breach of its responsibilities as a UNSC member in maintaining international peace and security?”

He reiterated Syria’s unremitting efforts to reach a political solution through intra-Syrian dialogue led by Syria without any foreign intervention and with priority given to counterterrorism, the return of displaced Syrians to their homes, the launch of reconstruction process and liberation of remaining Syrian areas from terrorists and illegal foreign forces.

Al-Jaafari said that the Syrian government has fulfilled its obligations regarding the committee on discussing current constitutions and submitted the names of its representatives.

The Syrian diplomat expressed appreciation for Russia and Iran over their efforts, particularly the recent summit meeting in Tehran and the agreement on Idleb signed yesterday in Sochi.

“Syria welcomes any initiative that spares the bloodshed of the Syrians and contributes to the restoration of security to any spot struck by terrorism and that Syria will continue its war against terrorism until the liberation of the last inch of its territory, whether by military operations or reconciliations,” he added.

“Idleb agreement announced yesterday is a time-bound agreement and it is part of previous agreements on de-escalation zones resulted from the Astana track since the beginning of 2017, essentially stemming from commitment to sovereignty and territorial integrity of the Syrian territories as well as liberating all the Syrian territories whether from terrorism and terrorists or from any illegitimate foreign presence,” he added.