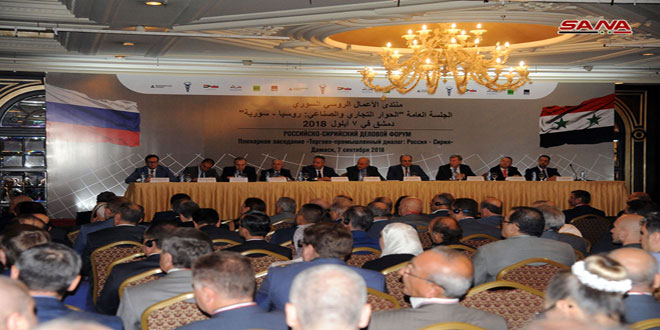 Damascus, SANA- The Syrian-Russian Businessmen Forum kicked off its activities on Friday with holding specialized working meetings to discuss investment opportunities in Syria and ways to develop them between the two countries.

The Forum is held at Dama Rose hotel in Damascus on the sidelines of the 60th edition of Damascus International Fair.

During the plenary session, Minister of Economy and Foreign Trade Mohammed al-Khalil stressed on the necessity of making a qualitative leap in economic and industrial cooperation between Syria and Russia and increasing the pace of trade exchange and areas of joint cooperation in several sectors.

He pointed out that companies and businessmen were encouraged to import many materials from Russia, The minister hoped that meetings held on the sidelines of the Fair will result in the signing of contracts between Syrian and Russian businessmen.

For his part, Russian Deputy Minister of Industry and Trade Georgy Kalamanov pointed to the great potentials possessed by the Syria and Russia in various economic and investment fields.

In turn, Deputy Prime Minister of the Crimean Republic and Permanent Representative of the Crimean Republic to Russia Georgi Moradov pointed to the importance of opening a transport line linking Syrian ports to Russian ports, especially in the Crimea, being the shortest among the available options, which will contribute to increasing the exchange of goods between the two sides.

The participants in the meetings stressed the need to establish joint Syrian-Russian companies to implement investment projects benefiting the peoples of the two countries and promoting the Syrian production, trade, industrial and banking sectors in the reconstruction phase.

They said that Damascus International Fair is an opportunity to develop trade exchange through studying investment projects in Syria, especially regarding reconstruction and construction.

They pointed out that the Fair will form a platform for signing many contracts between Syrian and Russian companies and businessmen to serve the interests of the two countries.

2018-09-07
Manar
Share
Previous Sahab 73, a plane designed and built by Syrians during the war
Next Army tightens grip on Daesh in Sweida eastern countryside