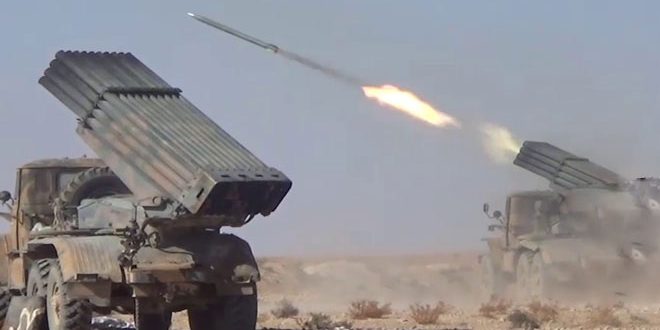 Hama/Sweida, SANA-Units of Syrian Arab Army operating in Hama countryside pushed ahead with military operations against dens of terrorist groups along the administrative border with Idleb province, inflicting heavy losses upon terrorists.

SANA’s reporter in Hama said that army units carried out intensive operations against sites of “Turkistan Party” affiliated to Jabhat al-Nusra on the eastern side of al-Ghab plain in the villages of Waset, al-Mansoura and al-Ziara.

Scores of terrorists were killed and others were injured during the operations, in addition to the destruction of terrorists’ sites.

The reporter added that the army directed artillery strikes on the frontlines of al-Nusra to the northwest of Hama, destroying a number of their sites in the area surrounding Kafr Nbouda and Tal al-Sakhar.

In the northern countryside, the army’s artillery raided positions of the so called “al-Ezza Battalions” in Maarkaba and al-Latamina, inflicting heavy losses upon terrorists’ ranks and equipment.

SANA’s reporter in Sweida said that army units, backed by supporting forces, advanced in the direction of Sad al-Zalf, Toluol al-Dab’a, al-Dabia, Alam, al-Safa and Arad al-Keraa, establishing control over new areas in the depth of 40 km in the eastern countryside of Sweida which led to enhancing the security in the area.

The reporter added that army units eliminated a terrorist group in Arad al-Keraa and chased their remnants as heavy clashes erupted in the direction of Toluol al-Safa which is one of Daesh main sites in the area.

In parallel with the clashes, the army’s artillery and Air Force launched strikes on Daesh positions in the area, killing many of them and destroying their vehicles and equipment.

Meanwhile, the army’s engineering units continued combing the recently liberated areas and dismantled a booby-trapped BMP vehicle and hundreds of IEDs and mines in addition to the destruction of a car bomb left by terrorists in Arad al-Keraa.

Later, an army unit destroyed a den for Daesh in Beir Hasan area to the east of Khirbet al-Ambashi, killing 13 of its terrorists and injuring dozens.