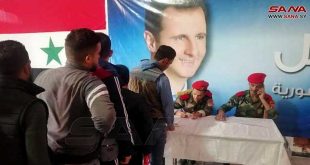 Daraa, SANA-Four persons were martyred and others were injured in an explosion of a workshop for manufacturing explosive devices left behind by terrorist organizations in the town of Mahja in the western countryside of Daraa.

SANA’s reporter said that a blast took place in a carpet factory in Mahja town, about 45 km to the north of Daraa city, which was transformed by Jabhat al-Nusra terrorists into a workshop for manufacturing IEDs before they were evacuated to northern Syria.

The reporter added that the explosion killed four persons and injured others.