Dozens of families exit via humanitarian corridors in Daraa 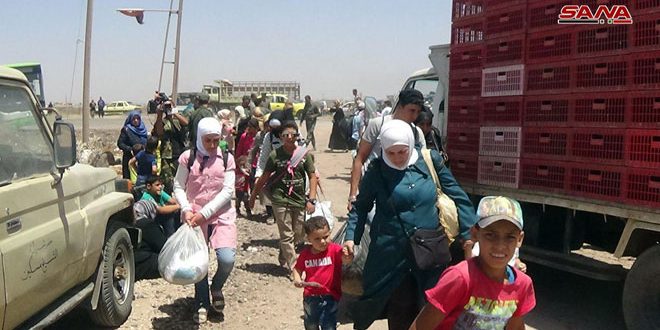 Daraa, SANA-Dozens of families have exited using humanitarian corridors opened by authorities in Daraa province, fleeing from areas where terrorists are positioned.

Earlier, the authorities opened three humanitarian corridors to facilitate the evacuation of civilians from areas were terrorists are located. The families were received by members of Syrian Arab Army, Internal Security Forces and health and relief teams.

Speaking to SANA from Kherbit Ghazaleh corridor, head of the psychosocial support team in the Department of Ecumenical Relations and Development Fedaa al-Eid said that the team came to provide psychological support for civilians who left the areas where there are terrorists, noting that her team began the process of registering data related to young children accompanying their families.

In turn, Dr. Mansour al-Khatib from the mobile medical clinic told SANA that the clinic received dozens of health cases and administered first aid to them, while the serious cases were rushed to Daraa National Hospital.

About 160 families, including children, women and elderlies, have exited via Kherbit Ghazaleh corridor and were transferred to temporary makeshift center in Jbab town until they determine the destination they want.

The citizens were able to exit from the towns of the eastern countryside of the province except al-Mesifra town which is still under Jabhat al-Nusra terrorists’ control who are preventing people from leaving by force.

The evacuated citizens elaborated on the criminal acts of terrorists who used weapons in order to prevent the citizens from leaving the towns under their control, confiscated the families’ personal documents and dispersed demonstrations against them.

On Wednesday, the authorities opened three humanitarian corridors to receive citizens willing to leave the province’s eastern and western countryside.