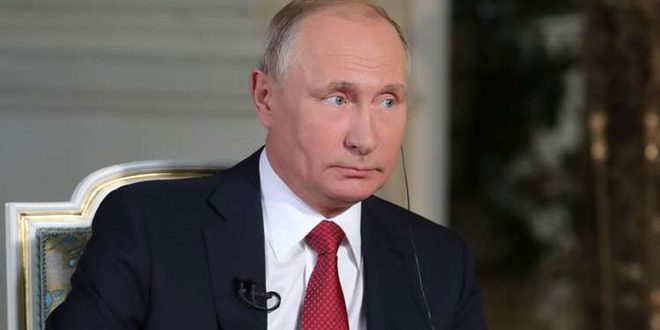 Moscow, SANA – Russia’s President Vladimir Putin stressed that the tripartite aggression on Syria on the 14th of April aimed at preventing to conduct an objective investigation into allegations of using chemical weapons in Douma city in the Eastern Ghouta area in Damascus Countryside.

Putin made his remarks in an interview with Austrian ORF TV channel, making clear that the alleged use of chemical weapons in Douma has been used as a pretext to launch military aggression against Syria.

He added that witnesses to the alleged chemical attack stressed that the incident is fake, noting that children and their fathers who appeared in the fabricated video indicated that they were transported to the hospital where terrorists started to take off children’s clothes and pouring cold water on them.

The Russian president noted that all claims of using chemical weapons are false and the aggression carried out against Syria under these pretexts breaches the international law since it was launched against a sovereign state.

He added that Russia asked the Organization for the Prohibition of Chemical Weapons to send a fact-finding mission to the area immediately after the Syrian army liberated the Eastern Ghouta from terrorists.