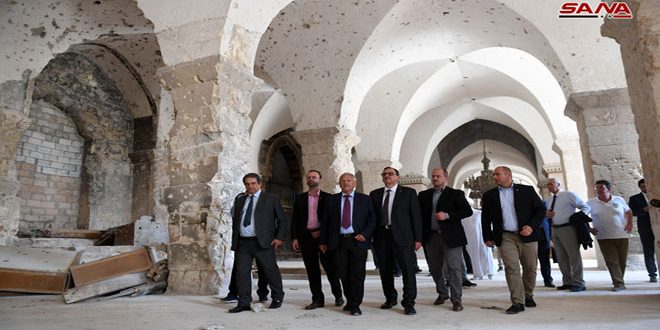 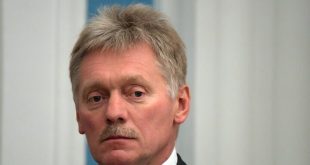 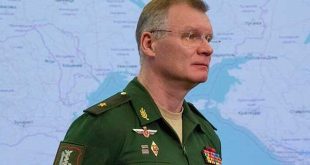 Aleppo, SANA – Member of the EU Parliament and head of the European parliamentary delegation, which visited Aleppo on Monday, Udo Voigt, stressed that the main objective of this visit is to inspect the reality of current events in Syria and to convey the real image to the people of the European countries since they don’t trust the western media anymore.

In a statement to SANA, Voigt said that the fierce terrorist war waged on Syria with the aim of destroying the country is backed by major powers like the US, France and Britain, in addition to Qatar, Saudi Arabia, Turkey and the Israeli entity. 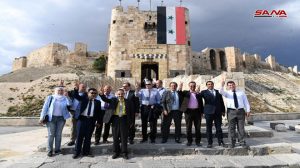 He congratulated the Syrian people on their steadfastness and victory against terrorism, hailing the ongoing rehabilitation efforts to rebuild damaged buildings in Aleppo which stress the strong will of the Syrian people.

For his part, Head of the Belgian party Nation Hervé Van Laethem, who is visiting Syria for the third time, said that the suffering of the Syrian people is caused by the terrorist crimes perpetrated by Daesh and Jabhat al-Nusra terrorist organizations as well as the Imperialist and Zionist policies.

He called for supporting Syria and standing by its people since the country is fighting terrorism on behalf of the entire world.

Laethem noted to the big propaganda and misleading campaigns led by western media, especially in regard to the war on Syria.

The delegation members met Aleppo Governor Hussein Diab who presented a review on the ancient history of city and its economic significance and the systematic destruction it witnessed due to terrorism as well as the efforts exerted to push the wheels of reconstruction.

They also visited Aleppo University, the branch of the Syrian Arab Red Crescent, the Old City, the Umayyad Mosque and Aleppo Citadel and inspected the huge destruction due to terrorism.

2018-06-04
m.eyon
Share
Previous International Forum for the Development of Parliamentarianism kicks off in Moscow with participation of Syria
Next Putin: Tripartite aggression on Syria to prevent investigation into alleged chemical attack 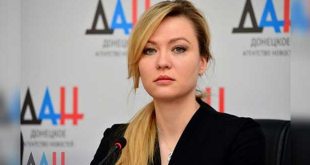