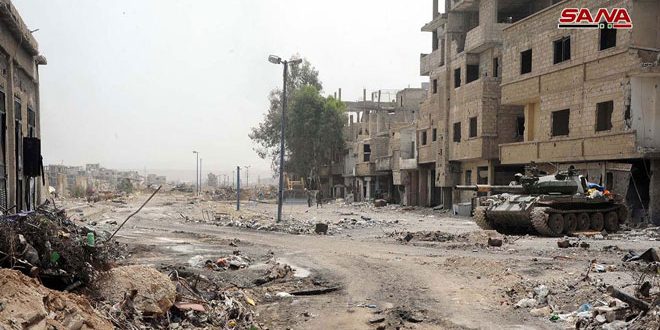 Damascus Countryside, SANA-Units of Syrian Arab Army on Saturday restored control over the southern part of al-Hajar al-Aswad neighborhood and continued its operations against terrorists
positioned in the northern part of the neighborhood.

SANA’s correspondent said that army units liberated the southern part of al-Hajar al-Asawd neighborhood after eliminating the last
terrorists’ gatherings and inflicting terrorists’ heavy losses upon their ranks and equipment.

The army’s engineering units are conducting sweeping operations in the liberated part of the neighborhood in order to cleanse it from IEDs and landmines planted by terrorists to hinder the Syrian Arab Army’s advance.

The correspondent added that the military operations are underway and concentrated towards the northern part of al-Hajar al-Aswad adjacent to al-Yarmouk Camp to clear it from terrorists until the liberation of the rest of al-Yarmouk Camp amid a collapse among terrorists.

Accurate strikes were directed by the Syrian Air Force and the army’s artillery on terrorists’ supply routes and movements, inflicting heavy losses upon terrorists in ranks and equipment,
the correspondent added.