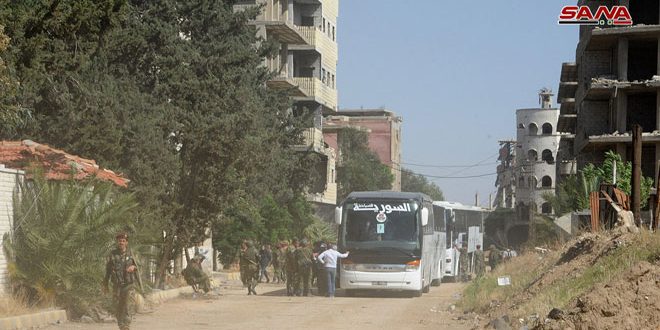 Damascus Countryside, SANA- 63 buses carrying the 3rd batch of terrorists and their families exited from the towns of Yalda, Babila and Beit Sahem in southern Damascus heading for northern Syria.

SANA reporter said that 63 buses exited from the three towns via Beit Sahem corridor after they have been thoroughly inspected to be gathered and then transported at once towards Idleb and Jarablus under the supervision of the Syrian Arab Red Crescent (SARC).

More buses entered via Beit Sahem corridor to the three towns to be prepared for exit on Sunday to northern Syria, the reporter said.

During the past two days, 46 buses carrying hundreds of terrorists and their families exited from the three towns to move towards northern Syria in the framework of the agreement stipulates for evacuating the terrorists and their families who want to leave while the legal status for those who want to stay will be settled after handing over their weapons.

The agreement also confirms the return of state institutions to the three towns will come as a second step besides providing services to the citizens after evacuating the terrorists from the three towns.