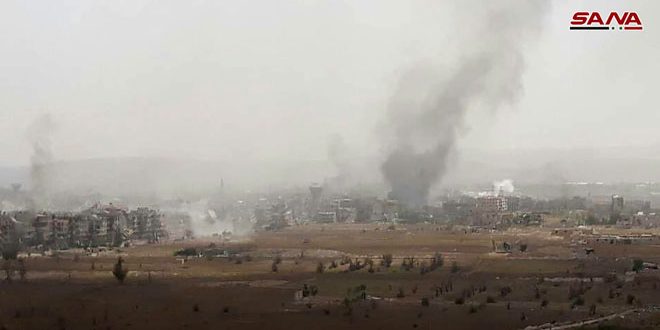 Damascus Countryside, SANA – Syrian Arab Army units split al-Hajar al-Aswad area, the main bastion of the terrorist organizations positioned in the south of Damascus, into two parts after converging the attacking forces coming from the eastern and western direction as part of the military operations aimed at eradicating completely the terrorist existence from southern Damascus.

The forces involved in the operations met together and divided the terrorists’ stronghold into two parts; southern and northern part.

The correspondent pointed out that the operations were accompanied by precise artillery and missile strikes at the gatherings of the terrorists and their supply routes.

In the early hours of the morning, the Army managed to establish control on al-Madres area and the communication department building to east of al-Hajar al-Aswad area as the army advanced from the western part of the area and gained control on Bilal al-Habashi Mosque. The Syrian forces made advance from the two directions and met each other at al-Hajar al-Aswad roundabout in the north of the area.

The military units continued their operations in a rapid pace and high accuracy in the implementation to clear the region from terrorism.

Following the offensive, the terrorists are believed to have retreated due to the heavy losses that inflicted upon their personnel and weapons, in addition to the destruction of most of their ammunition stores.

A field commander from the west direction said that the Army units had taken control of al-A’alaf area in the past few hours and advanced eastward towards al-Madres area and reached advancing forces from the direction of al-Zein area between al-Hajar al-Aswad and Yalda.

In a relevant context, the Syrian Arab Army units discovered a car bomb prepared by the terrorists to hinder the army advance on the sides of al-Hajar al-Aswad. The engineering units dismantled it immediately.

Military units have tightened the noose around the terrorist groups positioned in south of Damascus after gaining control on the neighborhoods of al-Maziniyah, al-Qadam, al-Asali and al-Joura, attacking them from several directions in preparation for clearing the area from terrorism.

Deir Ezzor, SANA- The settlement process has started at the sport hall in Deir Ezzor …