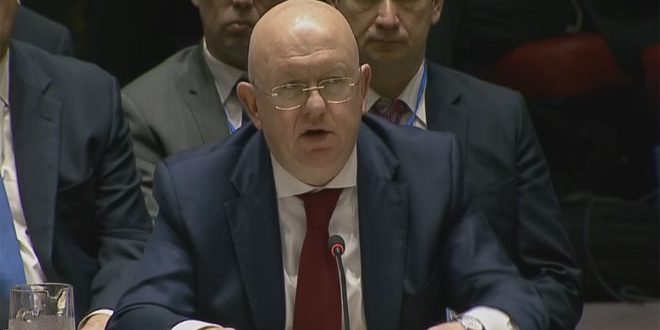 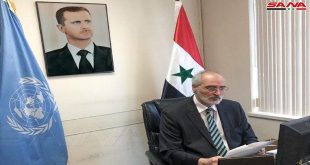 New York, SANA – Russia’s Permanent Representative at the UN Vasily Nebenzya said that the US-French-British aggression against Syria supports terrorist organizations and will lead to the deterioration of the humanitarian situation in it.

During a Security Council session held on Saturday upon Russia’s request to discuss the tripartite aggression on Syria, Nebenzya said that Washington and its allies targeted facilities and infrastructure in Syria without Security Council mandate, overstepping all international laws and the UN Charter.

He said that the US attacked al-Shairat Airbase last year based on claims of using chemical weapons without any evidence, and the same happened in the new aggression, as Russian military personnel who visited Douma couldn’t find any evidence of chemical weapons use, and nobody else managed to prove it.

Nebenzya said the three countries that attacked Syria didn’t wait for the result of the investigation of the Organization for the Prohibition of Chemical Weapons (OPCW), asserting that Russia denounces this aggression which harms the Syrian people and supports terrorists in the region, in addition to affecting international relations.

He said it’s shameful that the US is still boasting about its blatant violation of international laws and that it used the US Constitution as an excuse, when Washington should know that the use of force should only be carried out in accordance with the UN Charter.

The Russian Representative called on the British and French peoples to wake up because their governments are following the US in its uncalculated actions.

“Your hostile actions are complicating the humanitarian situation. You could have ended the war in Syria within 24 hours by giving orders from the US to the terrorists who are its puppets to end this war,” he added. 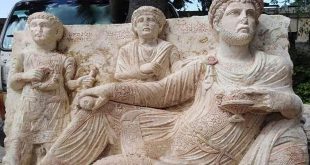