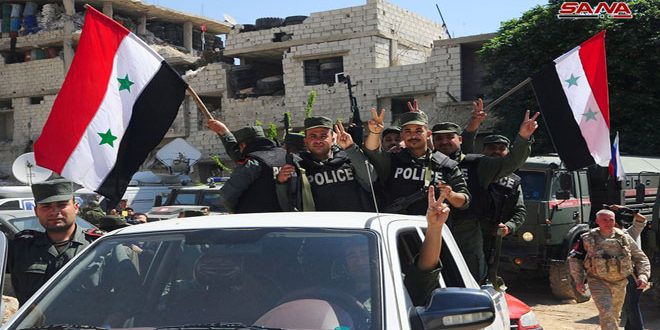 Damascus countryside, SANA-Units of Internal Security Forces entered Douma city in Eastern Ghouta on Saturday to enhance security and stability, in preparation for the return of all state institutions to the city after “Jaish al-Islam” terrorists’ defeat in it. 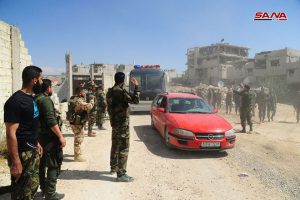 Major Khalid Jumaarom from Douma Police Station told SANA’s correspondent that the Internal Force Security entered Douma to restore security and stability to the citizens in the city who endured terrorism for years, pointing out to their readiness to help facilitate settling the legal status of the citizens.

Lieutenant Mohammad Ghazi Mohammed, a police officer in Douma, said that the police units will do their duty towards the citizens , receive their all complaints, and speed up the return of the normal life to the city in cooperation with the locals.

For their parts, Douma’s locals welcomed the entrance of the Internal Security Forces to the city, and talked about some of Jaish al-Islam terrorists’ crimes against them, which included forceful recruitment of their children and even elderly people, and depriving them of food and medical supplies.