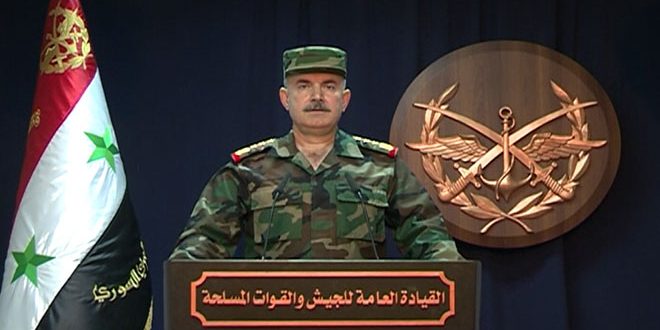 Damascus, SANA – The General Command of the Army and Armed Forces announced in a statement on Saturday evening that the Eastern Ghouta in Damascus Countryside is now completely clear of terrorism after all terrorists have been removed from Douma city.

The General Command said that in conjunction with our air defense systems’ response to the tripartite aggression launched by the United States, France, and Britain on several targets in Syria, and after a series of concentrated military operations over a week, units of the Army and Armed Forces and allied forces completed the cleansing of the Eastern Ghouta and all its towns and villages from armed terrorist groups, after all terrorists were removed from the city of Douma, which was the last terrorist stronghold in Eastern Ghouta.

The General Command said that engineering units immediately began canvassing squares, streets, and corridors to clear mines and IEDs planted by terrorists in the city, in order to enable the rest of the units to secure liberated areas and prepare them for the return of civilians to their homes safely.

To date, many weapons and ammunition factories and weapons depots have been found, along with many food depots, which have been monopolized by terrorists who starved and extorted locals, in addition to hospitals, medicine caches, and a large number of tunnels, the General Command said.

The General Command went on to assert that this great victory in the eradication of terrorism and the liberation of Douma is a natural result of the people’s rallying around the Syrian Arab Army, and this was made evident when people from various areas and villages of the Eastern Ghouta took to the streets demanding the Syrian Arab Army to liberate them from terrorism and restore security and safety.

The General Command of the Army and Armed Forces said that, as always, it proved by deeds not words that it is keen on the lives of citizens and their security and protection, reaffirming what it declared after its response to the tripartite aggression at dawn, which is that it will not stop fighting terrorism and uprooting it wherever it is on Syrian soil, even if some states try to protect it, and that it will continue fighting terrorism until security and stability are restored to all the entirety of the Syrian Arab Republic. 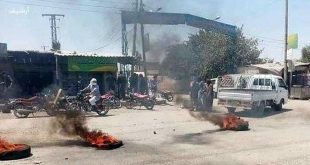