Army frees 8 abductees who were held inside Ghouta 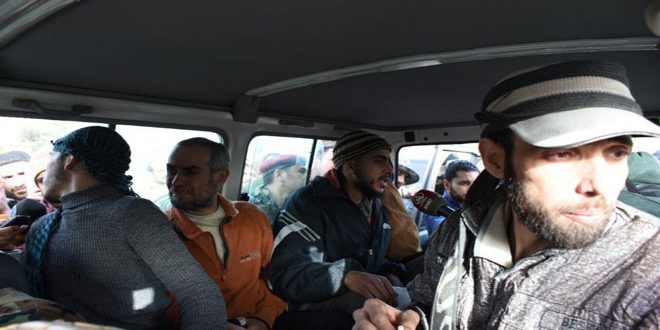 Damascus Countryside, SANA- SANA’s correspondent in Eastern Ghouta said that 10 buses carrying around 632 militants and their family members arrived on Saturday at Erbin corridor in preparation for their exit from Ghouta.

The correspondent said that there’s information about preparing 17 buses today to transport the first batch of militants and their families from Erbin, Zamalka, Jobar, and Ein Tarma to Idleb, with the process scheduled to be completed on Sunday.

Earlier on Saturday, the Syrian Arab Army freed eight abductees who were held by the armed groups in the central part of Eastern Ghouta in Damascus countryside.

The correspondent said that eight abductees arrived via Erbin passage leading to Harasta outskirts before being transported to the hospital to receive medical care. 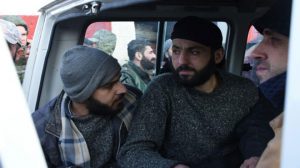 The correspondent said that the buses entered the outskirts of Erbin town in Eastern Ghouta to evacuate the gunmen who refused the reconciliation along with their families from the towns of Joubar, Zamalka, Erbin and Ain Tarma to Idleb province, adding that the Army’s bulldozers removed barricades and opened the main street near the Water Resource Bridge in order to open a new passage for buses that will transfer the gunmen and their families.

The correspondent clarified that the army dismantled the explosive devices and the mines on the road leading to Erbin town, fully securing the passage, indicating that it is planned to evacuate hundreds of gunmen and their families from Joubar, Erbin and Zamalka and transfer them through buses in a scenario similar to that of Harasta.

The correspondent pointed out that the gunmen’s submission and exit from towns and villages of Eastern Ghouta comes as a result of the accelerating victories of the Syrian Arab Army in its wide military operations launched in mid-February.

He added that army units are working on opening streets and removing barricades in Harasta city in preparation for the entry of the engineering units to cleanse the city of mines and explosives.