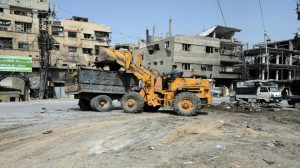 SANA, Damascus Countryside – Authorities have started the process of rehabilitating the infrastructure and restoring services to a number of towns and villages in Eastern Ghouta in Damascus Countryside after the Syrian Arab Army restored security and stability to them.

Al-Gharbi instructed the Director of the Internal Trade Department at the Governorate to rehabilitate the Syria Trading branch in Kafr Batna and to send mobile food supply trucks to the towns, in addition to providing bread to Kafr Batna’s citizens from Saqba’s bread production plant until the town’s plant is repaired.

In turn, Ibrahim asked the directors of services departments in the Governorate to prepare the necessary studies to start the process of rehabilitating services networks, public utilities and infrastructure, and to assess the scale of damage caused to the towns of Saqba, Kafr Batna,and Hamouriyah due to terrorism.