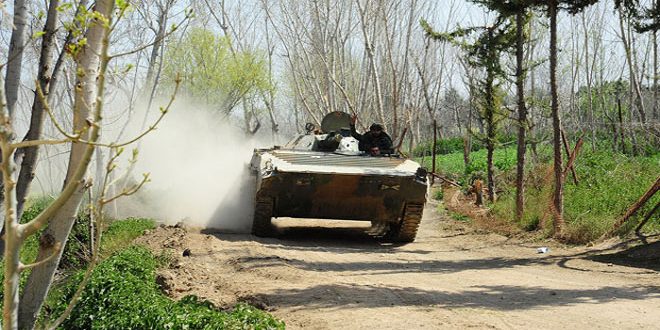 Damascus, SANA – Syrian Arab Army units advanced further in the operation to liberate Eastern Ghouta in Damascus Countryside from Jabhat al-Nusra terror organization and terrorist groups affiliated to it, eliminating terrorists in the towns of Saqba and Kafr Batna.

SANA’s reporter said that army units of the army implemented intensive operations during the past few hours using tactics suitable for preserving civilians’ lives, and these operations resulted in eliminating the last of the terrorists’ positions in Saqba and Kafr Batna towns.

The reporter said that the army is ensuring the security of the locals who are staying in their homes, as engineering units canvass the streets, buildings, and the tunnel network that terrorists had used to transport arms and munitions.

The reporter added that at the same time, the army is continuing to secure the safe corridors in the middle and northern sectors of Ghouta to provide the opportunity for civilians to exit the area.