President al-Assad to Army heroes in Ghouta: Syrian people are pride of field victories you achieve to restore security to Homeland 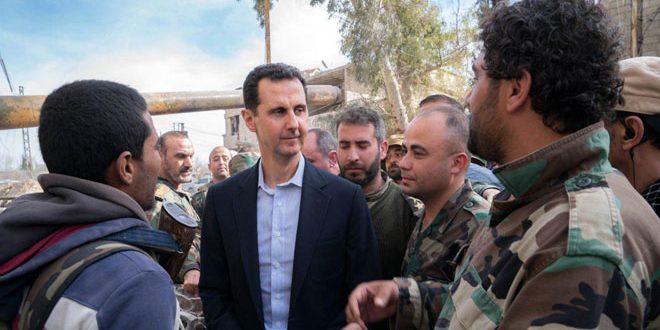 Damascus, SANA- President Bashar al-Assad on Sunday toured the front lines in Eastern Ghouta and met a number of Syrian Arab Army heroes positioned in a number of sites, congratulating them on the victories they achieve to end the suffering of Ghouta families and rescue them from the terrorists who were besieging them as human shields.

President al-Assad affirmed to army’s heroes that the Syrian people are pride of every soldier who has carried the gun to defend his homeland and pride of the field achievements being gained to restore security and stability, as well, to rescue the Syrian citizens from the claws of terrorism and its supporters.

“Every soldier, combatant or pilot who was carrying out the mission to whom he was charged, he changed the political map and the world balances with each village or city he has contributed to its liberation,” President al-Assad said.

During the tour, President al-Assad also met a number of families who have got out of regions where terrorists are still seizing, affirming that all state institutions work to secure needs of the families who were able to escape from terrorists and leave the areas where they still control.

“The state is responsible for protecting Ghouta families and liberate them from the terrorists’ grip and restoring security and stability to them and to the region,” the President said.

Later, the President visited one of the operations’ rooms working in the region where he was briefed on the track of the battles and the upcoming plans set for continuing the military operation and expelling the terrorists from the whole area.

President al-Assad stressed the necessity of going ahead in the fight against terrorism, but, at the same time, giving utmost interest to civilians if they were inside those areas, particularly as the people’s embracement to the Syrian army is one of the basic reasons of the coming victories, adding that the people’s support to army is based on the army’s protection of the citizens.