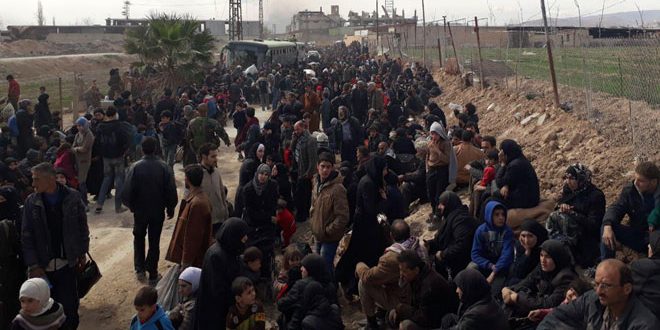 Damascus Countryside, SANA- Thousands of civilians, who were besieged by the terrorist organizations inside Eastern Ghouta, have exited through the safe corridor of Hamouriya that was opened by the Syrian Arab Army on Thursday.

The besieged civilians were used as human shields by terrorist organizations.

SANA reporter said that since early morning the army units and the Syrian Arab Red Crescent (SARC) teams were prepared and managed to secure the exit of a new batch of civilians from Ghouta.

The army units received the evacuated people and families and provided them with water and food in preparation to relocate them in the well-equipped makeshift centers.

Over the past two days, army units have secured the exit of hundreds of civilians held in the eastern Ghouta through al-Wafedeen Camp.

Speaking to SANA’s correspondent, a number of the evacuated families said that they tried to leave Ghouta, but the terrorists were preventing them by the force of arms, expressing happiness to escape from the terrorists and calling upon locals who are still being held by the terrorist organizations to stand against terrorism.

Meanwhile, an official delegation has visited the civilians who left Ghouta and it was informed about their needs.

Minister of Local Administration and Environment Hussein Makhlouf said that the Ministry provided 100 buses to transport civilians leaving Ghouta into the makeshift centers equipped with all requirements, providing them with health and social care, and paying attention to schoolchildren who have been prevented from education for years by the terrorist organizations.

In turn, Health Minister Nizar Yazigi said that his ministry secured medical services to civilians who escaped the terror of takfiri organizations, in addition to providing vaccinations for children.

Damascus Countryside Governor Alaa Ibrahim said that a number of makeshift centers in the province were equipped with all basic needs in order to receive large numbers of civilians leaving the Ghouta.