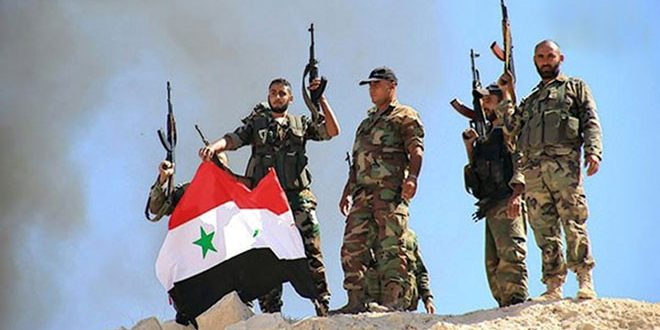 Deir Ezzor/Hama, SANA- Army units operating in Deir Ezzor continued hunting down the remnants of Daesh (ISIS) terrorists to eliminate the rest of their hotbeds in the southeastern countryside, inflicting heavy losses upon them in the personnel and equipment.

A military source told SANA that army units destroyed 5 machinegun-equipped tanks belonging to Daesh (ISIS) terrorists, killing all of their crew members in the depths of Badyiat al-Mayadeen in Deir Ezzor Countryside.

Syrian Arab Army units regained control over a hill serving as a vantage point in the northeastern countryside of Hama.

SANA’s reporter in Hama said that army units, in cooperation with popular defense groups, carried out special military operations against Daesh (ISIS) terrorist organization in the northeastern countryside, restoring control over one of the strategic hills, which overlooks Rasm al-Dahl village.

A number of terrorists were killed, others were injured, and their weapons and ammunition were destroyed due to the operations, while army’s engineering units dismantled IEDs and mines in the hill in preparation for fortifying the army’s positions in it.