Army uncovers weapons and ammo left behind Daesh in Homs 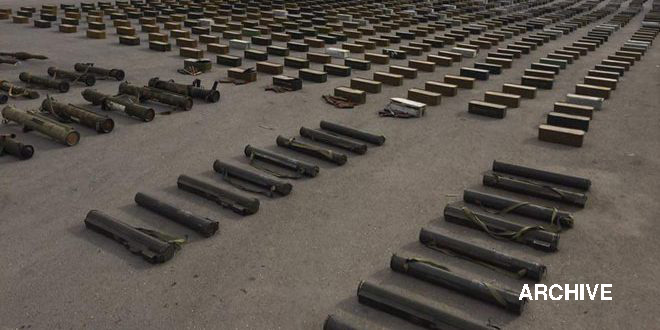 Provinces, SANA – Authorities on Tuesday uncovered amounts of weapons, ammunition, and various shells left behind by Daesh (ISIS) terrorist organization in the eastern countryside of Homs.

SANA’s reporter in Homs said that the authorities found amounts of weapons, ammunition and shells hidden in one of the dens used by Daesh before they been defeated in the eastern countryside of the province.

The seized weapons and ammunition included anti-tank missiles, mortars, machinegun ammo, a number of rifles, and variety of ammunition boxes.

Meanwhile, units of the army, in coordination with popular defense forces carried out intensive operations against gatherings of Jabhat al-Nusra terrorists in Damascus south western countryside.