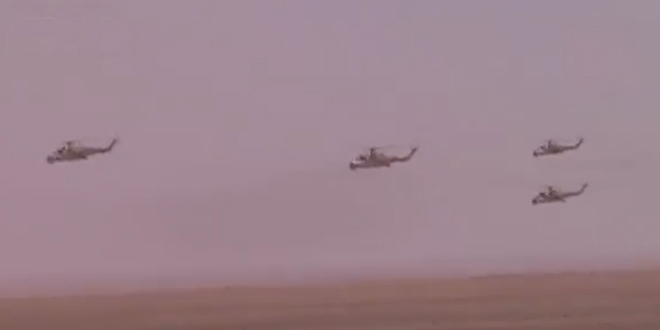 Provinces, SANA- Units of the Syrian Army along with allied forces destroyed the last fortifications of Jabhat al-Nusra terrorist groups in Hazem and Rabdah villages in Hama southeastern countryside.

SANA’s reporter pointed out that military operations resulted in the death and injury of many terrorists and the destruction of their fortifications and vehicles.

He also said that the army engineering units dismantled explosive devices and mines planted by the terrorists in locals’ houses and main streets.

Many Daesh (ISIS) terrorists were killed during the Syrian Arab Army operations to eradicate terrorism in Southeastern countryside of Deir Ezzor.

Air Force on Thursday carried out massive airstrikes against gatherings and supply routes of Daesh terrorists in surroundings of al-Boukamal city, killing six terrorists and destroying a car they were on board in al-Majaweda town, SANA reporter said.

Local sources in the eastern countryside reported that a car exploded while Daesh terrorists were preparing it to be detonated, killing and injuring many of them.