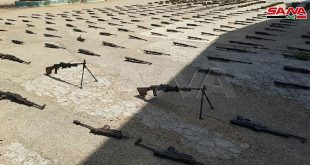 Deir Ezzor, SANA- Army units discovered large amounts of weapons, ammunition and explosive devices, some of which are Israeli- made in al-Mayadeen city in southeastern countryside of Deir Ezzor.

A field commander said the weapons included several kinds of heavy, medium and light weapons, some of which are of Israeli –made, mortars, ammunition, and NATO -made weapons and other European and western countries.

The commander added that the weapons also included armored and artillery equipment, large quantities of anti-armor ,  a 155 mm cannon  with a range of up to 40 km,  of NATO- made.

al-Mayadeen ammunition and NATO -made weapons army Deir Ezzor Israeli –made mortars 2017-10-19
Manar
Share
Previous Khamis: The government to set up 60 areas for craft industries in all provinces
Next Humanitarian aid convoy arrives in Deir Ezzor