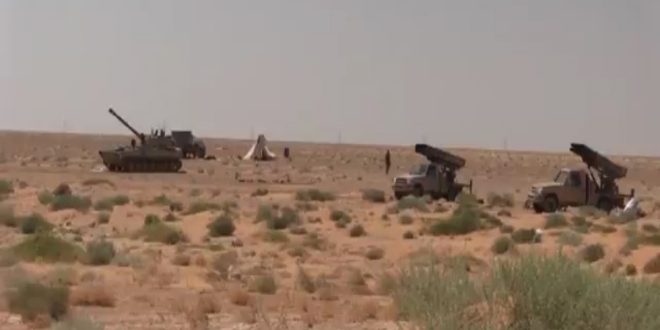 Homs/Deir Ezzor, SANA – Syrian Army units concluded their military operations in the eastern countryside of Homs province after reclaiming an area of 1,800 square kilometers and eliminating the last gathering for ISIS in the area.

A military source told SANA that army units concluded their military operations in the eastern countryside of Homs after eliminating the last gathering for ISIS in the area and liberating an area of 1,800 square kilometers.

The source said that the operations also resulted in restoring security and stability to tens of towns, villages, and farms, in addition to eliminating hundreds of terrorists and destroying their weapons and equipment.

Earlier, SANA’s correspondent in Deir Ezzor said that army units operating in Deir Ezzor province advanced further in the efforts to uproot ISIS in the southeastern countryside of the province by eliminating many terrorists in the western outskirts of al-Mayadeen town.

He said that army units clashed on Friday with terrorists from ISIS in the western outskirts of al-Mayadeen, which resulted in killing many terrorists and inflicting heavy losses in equipment on the terror organization.

The correspondent added that army units established control over the brad production plant at the town’s outskirts after eliminating the ISIS terrorists who were barricaded inside it after they covnered it to a weapons and ammo depot.