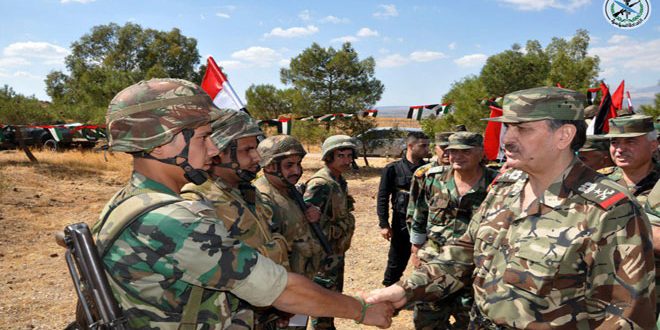 Quneitra, SANA – Upon the directives of President Bashar al-Assad, and on occasion of the 44th anniversary of October Liberation War, Deputy Commander-in-Chief of the Army and Armed Forces, Defense Minister Gen. Fahd Jassem al-Freij visited on Friday army units operating in Quneitra countryside. Accompanied by officers from the General Command, Gen. al-Freij met the soldiers in their positions and conveyed to them President al-Assad’s greetings and appreciation for their steadfastness and sacrifices in defending the homeland.

The Minister was briefed by field commanders about the nature of the operations the units are carrying out and inspected the forces’ combat readiness, commending their efforts in facing terrorist groups.

He lauded the soldiers’ high morale, asserting that Syria will continue fighting terrorism until its is uprooted completely from the country.