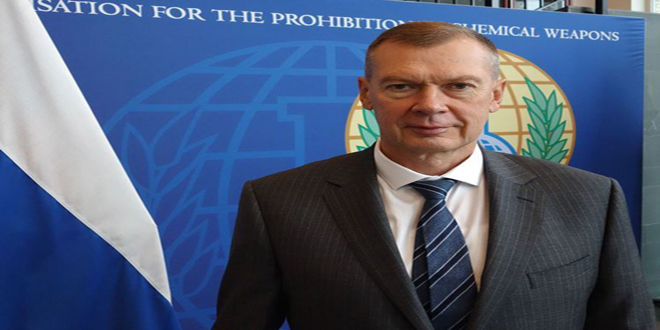 Moscow, SANA – Russia’s Permanent Representative to the Organization for the Prohibition of Chemical Weapons (OPCW) Alexander Shulgin affirmed on Thursday that the fact that the OPCW did not include the “White Helmets” video into the report on khan Sheikhoun incident in Idleb suggests that the US decision to carry out a missile strike on a Syrian airbase was based on “insignificant information.”

On April 7, the US committed a flagrant aggression targeting al-Shayrat airbase in Homs countryside in Syria , killing and injuring a number of people, in addition to causing huge material damage.

The Russian news agency Novosti quoted Shulgin as saying that the fact that the OPCW Fact-Finding Mission (FFM) did not include a video footage by the “White Helmets” NGO into the report on April’s chemical incident in khan Sheikhoun.

“As for the video of children dying presumably from the exposure to sarin, the FFM leaders explained that the experts did not even analyze it as they did not consider it to be primary evidence.” He said.

Shulgin went on saying that “but excuse me, photos of whom US Permanent Representative [to the United Nations] Nikki Haley was demonstrating at a meeting in New York? Were they not of these children?”

The Russian envoy said that reportedly it was exactly this footage that made Trump take the decision to strike the Syrian al-Shayrat air base and that means that the US president took a critically important decision to launch missiles on the basis of just some sort of insignificant information.