National meeting in Saasaa area in support of army against terrorism 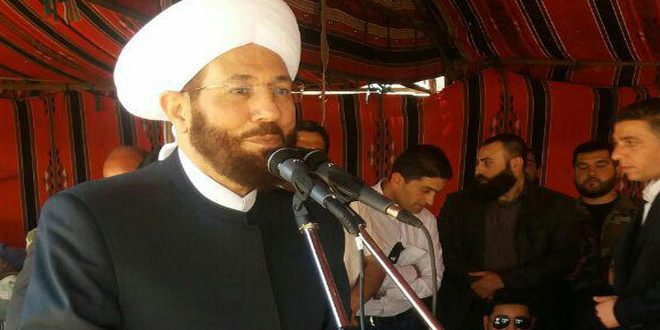 Quneitra, SANA – A national meeting was held in Saasaa area in the countryside of Damascus with the participation of civil, official and religious figures from the provinces of Quneitra and Damascus Countryside. Governor of Quneitra Ahmad Sheikh Abdul-Qader addressed the meeting saying that the people of Golan and Quneitra support their homeland against terrorism and its backers, stressing that Syria will achieve victory thanks to the sacrifices of its armed forces.

The Grand Mufti of the Republic Ahmad Badr-Eddin Hassoun affirmed during the meeting that “our hands are stretched out for reconciliation, ending war and reconstruction.”

He said the participants in this meeting in Saasaa, which is located on the outskirts of the Israeli occupied Golan, seek to convey a message that they stand by the Syrian Arab army in its war against Takfiri terrorism.

The participants, he added, also send a message that they support reconciliation and laying down arms.

Hassoun stressed that all the military crowding and gathering in Jordan on Syria’s southern border “will not scare us” and will be defeated at the hands of the heroes of the Syrian Arab Army.