New batch of Russian aid distributed to families in Sweida 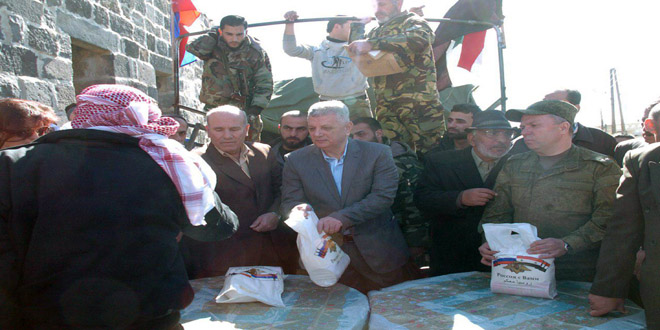 Sweida, SANA – A new batch of food aid provided by Russia was distributed on Tuesday to 350 families affected by terrorism in al-Jneina village in the northeastern countryside of the southern Sweida province.

Today’s supplies came as part of the humanitarian aid provided by the Russian Federation to enhance the steadfastness of the Syrian people in the face of terrorism.

Sweida Governor Amer Ibrahim al-Eshi said this aid reflects the supporting stance of the Russian people and government towards Syria and aims at alleviating the Syrians’ suffering under the unjust blockade imposed on them.
M. al-Frieh/H. Said

air humanitarian Russian aid Sweida 2017-02-07
Manar
Share
Previous President al-Assad to Belgian media: Cooperation between the US and Russia is going to be positive for the rest of the world, including Syria
Next Russian Defense Ministry: Reports about Russia’s airstrikes on Idleb are blatant lie