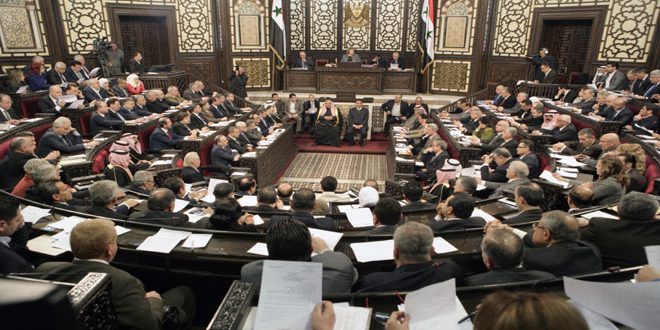 Damascus, SANA – The People’s Assembly on Sunday held the first meeting of the third regular session of its second legislative term, chaired by Speaker Hadiyeh Abbas and attended by Prime Minister Imad Khamis and other ministers.

At the start of the session, Speaker Abbas said the victories achieved by the Syrian Arab Army require the legislative and executive authorities to exert more efforts to keep up with these victories and preserve them, asserting that improving citizens’ living conditions is one of the most important ways to bolster steadfastness.

She also said that other issues that have special importance are caring for the families of martyrs and injured and missing people, caring for the displaced, fighting corruption, developing health services, and dealing with the rising prices in the market.

Abbas saluted the martyrs who sacrificed their lives in order to restore drinking water to Damascus.

For their part, Assembly members called on the government to find immediate solutions to alleviate citizens’ suffering, criticizing the government’s performance regarding services and livelihood issues, particularly in terms of electricity and drinking water.

The members addressed a number of issues related to martyrs’ families, tourism, water resources, fuel, and health, in addition to increasing relief for Deir Ezzor, restoring drinking water to Aleppo, administrative management, and compensating farmers who were affected by frost, among other issues.

Also during the meeting, Premier Khamis briefed the Assembly on the government’s performance, addressing the member’s queries and comments about its performance, noting that the government is working under exceptional circumstances caused by the war which affect services, but there are plans to address these issues.

He said that Syrians are suffering from cold, lack of electricity, and high prices, along with the challenges posed by the war, stressing that the first step towards overcoming these challenges is to eliminate terrorism.

Khamis addressed what some Assembly members described as deterioration in the government’s performance in the fields of water and electricity, stressing that this is incorrect as the government’s performance is improving as it continues to provide services despite the lack of water and electricity resources and the attacks on power sources in the central region.

“When the terrorist cut off the water from Damascus, and that water was cut off from three main sources, the government’s establishments and with the aid of the Syrian Arab Army managed to implement an alternative plan that provided 40% of the water needs of the inhabitants of Damascus,” he pointed out.

He said that the government devised an eight-month plan to address the power issue, asserting that there will be no shortage in gas during the next six months, but he also noted that the only way to provide electricity consistently is by importing fuel, something which is hindered by the embargo imposed on Syria which adds 20% to the cost of importing petroleum products, adding that this importation takes time and considerable funds, and that a petroleum tanker has arrived in Syrian ports on this very day.

Khamis said there will be a specific mechanism for protecting al-Figeh spring that provides water in Damascus, and that a plan that utilizes local water sources will be implemented in Aleppo to improve the situation there.