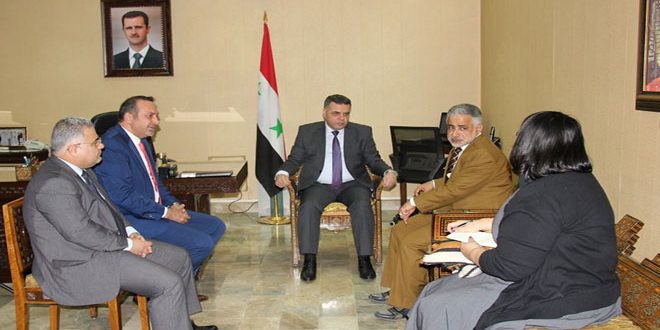 Damascus, SANA – Minister of Education Hazwan al-Waz discussed on Thursday with Director of the Beirut-based Regional Bureau of the United Nations Educational, Scientific and Cultural Organization (UNESCO) for Education in the Arab States Hamad Bin Saif al-Hammami results of the joint field visit which a delegation of the Ministry and the UNESCO Bureau paid to Aleppo city.

Minister al-Waz said the visit came within the framework of following up on the emergency plan drawn up by the Ministry of Education to repair 50 terrorism-hit schools in the eastern neighborhoods of Aleppo city to be ready by the end of next May.

He noted that 18 schools have already been rehabilitated.

He said the massive damage caused to schools in the eastern neighborhoods and the Old City of Aleppo has been assessed AND reviewed with the aim of determining needs to re-launch the educational process, referring to providing psychological support to affected students and supplying textbooks and other classroom requirements.

The Minister also added that the Ministry has drawn up a plan to get students who have dropped out of schools due to the terrorists’ practices enrolled back in school through a special category /b/ curriculum.

In turn, al-Hammami stressed the UNISCO readiness to provide some urgent and emergency assistance to schools, particularly desks and solar panels for lighting supply, in addition to providing all possible support to a number of current and future projects, mainly teacher training.