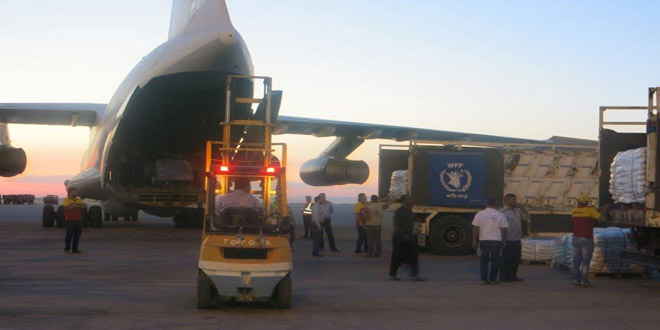 Hasaka, SANA – The World Food Program (WFP) extended the deadline for transporting food and other aid supplies to the province of Hasaka via airlift until the end of March 2017.

Speaking to SANA’s reporter, head of the WFP office in Qamishli Afraa Nouh said that the Program will continue delivering aid to Hasaka till the end of March in order to deliver the largest possible amount of humanitarian aid.

she pointed out that a new batch of aid arrived on Monday to the Hasaka, including 1810 food packages, 546 boxes of vegetable oil, and 910 bags of rice from the WFP, in addition to an amount of non-food aid from the United Nations Children’s Fund (UNICEF), including 2500 blankets and 2413 boxes of winter clothes.

She added that 26,380 food rations had arrived via the airlift during January out of 35,000 rations that are planned to be delivered during this month.