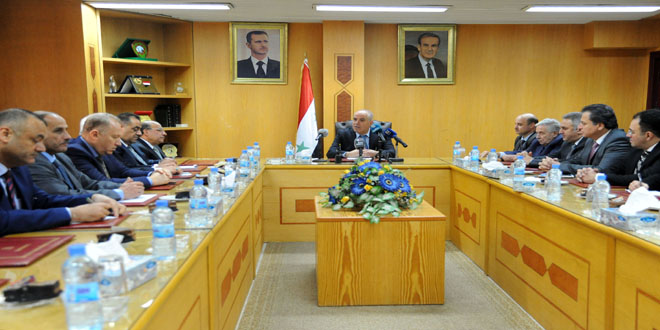 During a meeting with a delegation of the Iraqi Federation of Chambers of Commerce, headed by Jaafar al-Hamadani, al-Gharbi said the Syrian government is keen to meet the demands of the Iraqi commercial and economic business men within a short period and to work on establishing a Syrian permanent trading center in Iraq and a joint Syrian-Iraqi Chamber of Commerce in Syria, in addition to finding appropriate solutions to the process of banking transfers between bothe countries.

The two sides also stressed during the meeting the need to set up an executive MoU that includes practical steps and appropriate mechanisms to promote trade and activate the flow of goods and products between Syria and Iraq.

For his part, al-Hamadani hoped that the victories made by the Syrian Arab Army will activate the exchange trade movement between Syria and Iraq via al-Tanf crossing in Syria and al-Waleed crossing in Iraq in order to activate the bilateral economic and trade relations.

In turn, members of the delegation called for establishing a trade center or a permanent exhibition for Syrian products in Iraq, particularly in Basra or al-Anbar and setting up a mechanism that ensures the arrival of Syrian agricultural and industrial products to Iraq through al-Tanf crossing. Hamdan affirmed that the Ministry is ready to provide all the facilitations that would develop trade and industrial relations with Iraq in order to achieve economic benefits for the two countries.

The Syrian government’s readiness to facilitate economic cooperation with Iraq was also stressed by Prime Minister Imad Khamis during a separate meeting, at the end of which a work team was formed to follow up on the points that support communication between economic businessmen from both countries.